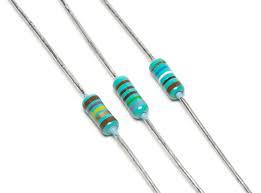 High-power resistors that can dissipate many watts of electrical power as heat may be used as part of motor controls, in power distribution systems, or as test loads for generators. Fixed resistors have resistances that only change slightly with temperature, time or operating voltage. Variable resistors can be used to adjust circuit elements (such as a volume control or a lamp dimmer), or as sensing devices for heat, light, humidity, force, or chemical activity. 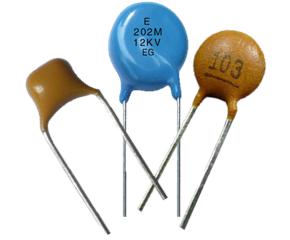 A capacitor is a passive two-terminal electrical component that stores electrical energy in an electric field. Capacitors come in several different varieties, the two most common being ceramic disk and electrolytic. The amount of capacitance of a given capacitor is usually measured in microfarads, abbreviated μF.

A light-emitting diode (LED) is a two-lead semiconductor light source. It is a p–n junction diode, which emits light when activated.

When a suitable voltage is applied to the leads, electrons are able to recombine with electron holes within the device, releasing energy in the form of photons. This effect is called electroluminescence, and the color of the light (corresponding to the energy of the photon) is determined by the energy band gap of the semiconductor. 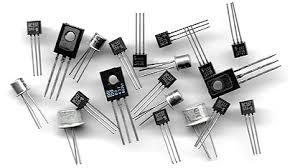 It is a semiconductor device used to amplify or switch electronic signals and electrical power. It is composed of semiconductor material usually with at least three terminals for connection to an external circuit. 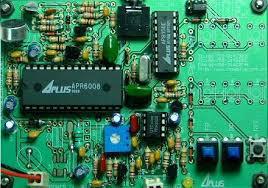 An integrated circuit is a set of electronic circuits on one small flat piece (or “chip”) of semiconductor material, normally silicon. The integration of large numbers of tiny transistors into a small chip resulted in circuits that are orders of magnitude smaller, cheaper, and faster than those constructed of discrete electronic components.

ICs have two main advantages over discrete circuits: cost and performance. Cost is low because the chips, with all their components, are printed as a unit by photolithography rather than being constructed one transistor at a time. Furthermore, packaged ICs use much less material than discrete circuits. Performance is high because the IC’s components switch quickly and consume little power (compared to their discrete counterparts) because of their small size and close proximity.